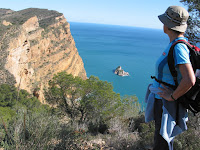 You cannot miss this 10 Km. ridge to the west of Benidorm which gets its name , not from ice and snow, but from the reflection of moonlight on the calcite rocks which form the 1100ft. cliffs on the seaward side and which , to mariners, looked just like ice.
The ridge runs from Punta de Pinet at the eastern end of Benidorms Levante Beach, to the main summit (438m), then drops sharply and dramatically to Punta Bombada de Albir in the west, with its lighthouse overlooking Albir beach and the Bay of Altea.For those who like to know what they are walking on, the mountain is made up of Cretaceous Limestone, with the dip slope of the Benidorm syncline rising gently at an angle of 20 to 30 degrees, until, on the crest the cliffs plunge vertically, even overhanging at times ,to the deserted beaches below.
From the landward side the ridge looks for all the world like one of our Lakeland Fells, with five seemingly gentle undulations, but do not be deceived. Whilst the full traverse of the cliff tops is highly recommended as the most rewarding cliff walk on the Costa Blanca,with inspiring views in all directions, it is certainly a demanding walk.
Dispite its proximity to Benidorm, the Sierra Helada must be treated with respect.

This walk varies from the 400m climb at the start followed by a clear but rough path along some 3km of steeply undulating cliff edge, (another 275m ascent and 350m descent), before returning to Albir along a variety of paths, tracks and roads through pinewoods entailing another 120m of ascent and 445m of descent to the Start Similar to the ascent and descent involved in climbing the highest mountain in England! The return involves careful path finding, helped by a series of cairns and red dots and takes approx two hours.