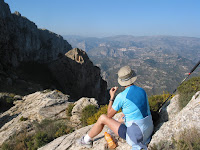 A 4km. limestone ridge running west to east from the Algar Valley to Calpe.

The Sierra de Bernia form the background for Altea and Albir and afford hikers of all levels interesting walks.The Bernia circuit and Fort Bernia are fairly easy walks offering incredable views on both sides.
Fort Bernia was built during the reign of Philip II of Spain to control and suppress the Moorish uprisings, which were commonplace in these mountains. When the Moors left, fort Bérina was abandoned.
The Bernia Ridge rises from the sea from the Moro de Toix between the resorts of Altea and Calpe. The first part of this ridge is known as the Toix ridge but may be marked on the map as "MAR Y VILLA". The ridge then descends to become the Mascarat Gorge through which the main road, the motorway and the railway all pass. The ridge then rises as a great cliff eventually easing to the first summit at the eastern end. From here the ridge continues seen as a very jagged skyline from both the north and south sides for aproximately four kilometers. The highest point lies well to the western end at 1129 metres. It is not possible to walk continuously along this ridge though sections of it are walkable, but do involve a certain amount of scrambling. Apart from the actual ridge there are popular walks both round it and through it. It can be approached from either the Altea (south) side or, more commonly, from the north side which is the natural starting point at the Bernia restaurant at a height of approximately 650 metres.The complete ridge is not a walk but a serious and exposed scramble. Even so it is not possible to remain on the crest and a rope is essential at the point where 'FIN' is painted on the rock in order to abseil. Although the ridge viewed from below seems to be continuous and reasonably level for much of its length it is, in fact, a series of towers, pinnacles and broad buttresses. From time to time it is necessary to track back to find ways down and round vertical drops and other obstacles to progress. Getting up on to the ridge is often much easier than finding a way off it. Exploration and finding the best way can be very time consuming. The waymarked scramble route along the ridge may take anything from 3 to 5 hours. A number of misleading goat tracks exist in many places along the ridge.As well the West, as the East summit can be climbed. 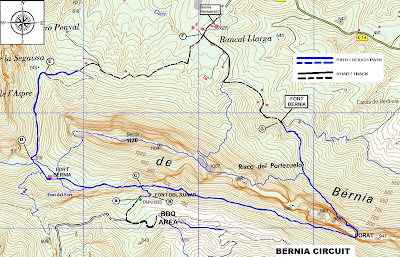 DESCRIPTION. This is a popular walk and deservedly so. It is a circuit encompassing the main part of the Sierra but excluding its Eastern end. Starting at an altitude of 650 meters gets you into easy contact with the higher part of the mountain. Yet the walk is quite challenging involving some easy short rock scrambles, short traverses across or slightly up scree, some steep climbs and a 30-meter long semi stoop/ crawl through the "Forat”. Views are magnificent especially from the Fort onwards. The ruined Fort is interesting and the "Forat” is a curious feature. This is a tunnel through the "rock spine" of the Sierra some 30 meters long and in part approx a meter high and wide, not claustrophobic as daylight shines through and taken with care, no hazards. Sometimes muddy.
Can also be started from Bernia Restaurant (see map with directions).

EAST SUMMIT SCREE RUN
A mile-long run in great shape, probably due to the difficult scramble around East summet arches to get to it.
Click here for photos 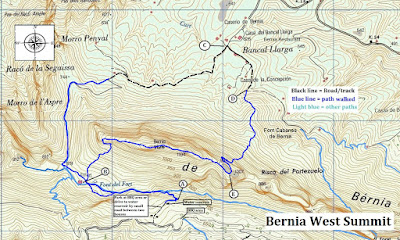 This walk has been made a lot easier by tthe addition (mostly in 2012)
of chains and ropes to help on rougher scrambles.
Best done clockwise as some of the scramples would be more difficult anticlockwise. 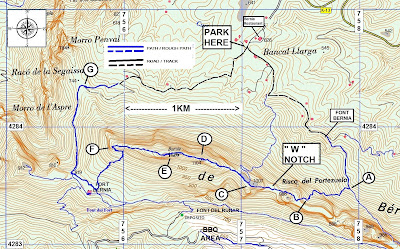 A variation of above walk with more time walking ridge. 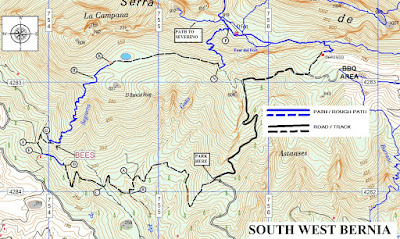 GENERAL DESCRIPTION. A fourth way to climb Sierra Bernia from the South up part of the old mule track of the Camino de Jalon with a superb view from “Rock Gate” col near the top. Possible detour to climb the spectacular peak of Severino.
Seductively easy for the first hour along forest tracks. Then steep up the Camino Jalon mule path to the ruins below Severiño. Level track to a small plateau above the “Cave House”, followed by another steep mule path to “Rock Gates” col, (possible ascent of Severino. Described later) and then right to the Fort. Then a path to the Fort and on from there, a new path (2010) leading down to the Picnic Area. The 40mins down the surfaced road to the cars could be avoided if enough cars were prepositioned at the picnic area.

Did the Main Summit (West) Walk today (02-01-12) and a chain has now been fixed behind the fig tree which considerably aids negotiation of this tricky section. Fantastic walk!!
Regards