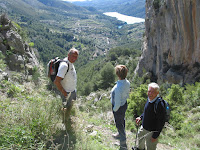 The history of the Moorish occupation of this part of Spain for overseven centuries is well documented elsewhere, but the remains of watch towers and castles are still to be found throughout the region on many strategically situated crags, and certainly add interest to a day in the mountains. Our first castle, the highest in the region, is right on top of a sheer crag overlooking the northern side of the Guadalest Valley forming part of the Sierra de Serrella. This range runs in a shallow arc from east to west and excellent views of the range can be had from Guadalest and the C3313. The zig-zags of the forestry road can be seen crossing the front of the castle crag and disappear over a col to the right of the crag. At the bottom left of the zig-zags a small red building marks the pumping station. The castle is not marked on the military maps, but its water supply is Pozo de Castellet.

From the starting point your destination towers above you with its ruined Castillo just visible. But the easy start up track and path gives you your “second wind” and superb views of the Guadalest Reservoir. Then the steep path ascending the rugged Barranco de les Coves, with its occasionally gushing stream and rock scrambles, ends at a fuente. To the West rises the imposing Barranco de la Canal de les Coves with its two parallel spines of upturned strata leading to Malla del Llop, (Alt 1357m). To the East the spectacular peak of the Castillo now looms appreciably closer.

There is another 300m climb with the reward of the stunning 360-degree views from the Castillo.