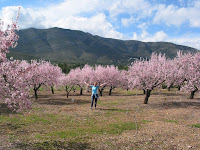 THE TOWN OF JALON
The village of Jalon is at the heart of the Jalon Valley. At the Old Square there is a fountain around which there is an open market heldon Tuesday mornings. Seen from the square is the famous Jalon Church with its blue dome. Roaming around the many small streets, you will find an abundance of shops, bars and restaurants. Jalon is very famous for its local wines. There are at bodegas (wine cellars) where you can sample the various types before buying.
Jalon was under Arabic domination for over five hundred years. The Arabians built two castles, one for the Solana (the Aixa) and another in the Bernie. Both fortresses controlled the Jalon Valley and the numerous settlers. The Arabians left behind the typical house style, for which Jalon is famous today, i.e. houses of stone and old bricks with large wooden doors as well as decorated walls.
The Arabic culture influenced life in Jalon up to its final displacement in the year 1609. After that the trade with raisins became the major economic activity. Many farmers from Majorca settled in Jalon in the 18th and 19th centuries and started cultivating the land, concentrating on grapes and raisin production.

We did this walk today, as the almond blossom is coming into bloom. It is a very pleasant easy walk, and the instructions are brilliant. The only thing we didn't see was the blue house near the end of the walk (perhaps it`s been painted!), although we did find the track by the electricity pylons. Thank you for such accurate detailed instructions.

Hi, the instructions are perfect, thanks! But the text needs updating: the town is called Xaló, and there is no fountain in the square anymore. Maybe its interesting to put the link to the Tourist Info? http://valldepop.novitur.com/?lang=en