Calpe's old town still has nice wide avenues where modern buildings and old architecture collide. Calpé is almost three thousand years old and in this area it still retains a sense of history and tradition. The earliest archaeological findings, at the time of the Iberians were found at the Ifach cliffs. Later the Romans established a wealthy colony at the coast whose main activity was the trade of dried and salted fish.
In the Middle Ages, Calpe's local population developed agriculture. Christians and Moslems lived here peacefully together, despite the many attacks from pirates between the 14th and 17th century. In the 18th century this threat was removed and Calpe enjoyed an economic upswing which continues to the day. 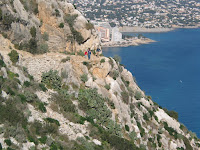 In Calpe, you can stand in front of or climb to the top of the Penon de Ifach, one of the smallest natural parks in Spain. It is the symbol for the Costa Blanca although just looks like an immense bulk or lump of limy stone that reaches 332 metres in height and extends it arm into the sea measuring about 35 hectares. It was declared a Protected Natural Park in 1987 due to the great richness in flora and fauna that it holds. Over 300 species of flora can be appreciated and there is even one called the ‘sylene of Ifach’ which is only found there. As far as fauna, the coleopterous, silver seagulls and the swift are of great interest.
It seems almost impossible that such a small seemingly insignificant piece of land could have lived as much history as the Penon de Ifach has. Its beginnings go back too far to be completely confirmed, but it is thought that it got its name from the Libyans: Ifach in Libyan means ‘ to the North’ having first seen the Rock of Gibraltar in the south .

THE WALK
In Calpe follow the signs for Park Natural del Penyal d'Ifach. Leave yourcar in the parking place by the entrance of the park, and walk to the information center of the park. (Roadmap of Marina Alta) Distance: 1h30min/5km The 30 meters long tunnel (10min) (200 m) crosses the wall from west to east. Vines, flowers and grass pop out from the cracks of the entrance wall. 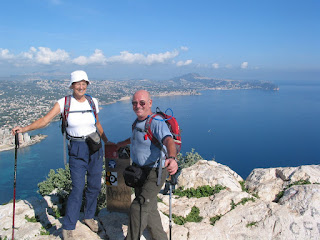 When the path forks (20min) (235 m), go right, if you want to continue to the top (40min) (332 m), where the panorama encompasses all the great peaks and the coastline all the way to Alicante.
Bear left, if you want to visit a projection of the east face of Ifach. It takes five minutes to reach the tip of the projection with views to the cape of San Antonio behind the tip of Moraira and to the last foothills of the Peñon. Here you can observe the sea gulls from a short distance. Large colonies breed and raise their young on the rocks. You can watch them resting on the cliffs, gliding low on the sea and swooping down into the water.

These jackpots continue to grow until anyone wins, so they promise huge payouts. Otherwise, should you wish to keep the stakes low, take a look at|try} the totally different bonus offers or promotions when joining 우리카지노 an internet slots web site. Aside from in a position to|with the ability to|having the ability to} play free slot video games earlier than switching to actual cash slots, could also|you can even} take pleasure in blackjack, progressive jackpots, keno, roulette, and live vendor video games. Slots Empire includes a top-of-the-line sport library with 253 on-line casino video games powered by RTG and Visionary iGaming. The focus is on slot video games, with 200+ three-reelers, five-reelers, 3D, multi-payline slots, and progressive jackpot slots.