The highest of the Costa Blanca mountains, the Aitana is a broad range of high ground

stretching from Polop in the east to Puerto de Tudons on the Sella to Alcoy road.
The summet is occupied by the military.
Aitana safari park

Located high in the Aitana mountain range, near the village of Sella, and approximately 33km inland from Benidorm lays the acclaimed Aitana Safari Park. Following a set trail there are many animals to see, including lions, tigers, elephants, buffalo, zebra, and giraffe.
There is also a childrens zoo for the little ones to enjoy, and the Daktari Park which is a nursery used to raise the youngest animals. Other facilities include a picnic area, and restaurant specialising in local foods.
The park can be reached within an hours drive from Alicante. Take the A7 toll road or the N-332 coastal road to Villajoyosa, and then head towards La Sella, passing through Orxeta. The park is approximately 15 km after La Sella near the town of Penaguila. Take motorway A-7 towards Alicante. Take exit No 66, for Villajoyosa (approximately 28km from Alicante). Take the road from Villajoyosa to Sella, passing through Orxeta. The Aitana Safari Park is about 15 km after Sella near the town of Penaguila.


Guhyaloka Buddhist Retreat Centre
Guhyaloka is a men’s Buddhist retreat centre run by the Friends of the Western Buddhist Order since 1986. Far from the hustle and bustle of the modern world Guhyaloka is a place to relax, unwind, and live a simpler life alone or in the company of others.
Click here for details 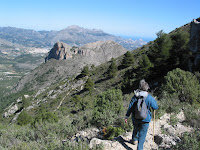 An excellent walk, certenly one of the best in the Aitana range. A circular walk, which crosses the sierra and encompasses views and aspects of both sides of the range. Passing through the narrow Paso Contador (used to count sheep singly as they passed). Spectacular views of the Sierra Bernia and Aixorta to the east and the Arc valley leading to Sella to the west. Soon followed by a stiff climb over the ridge of El Carrascal with a shady place at the summet from which to admire Puig Campana and Sanxet before descending into the wooded Sanxet valley with its Buddhist colony. Returning over the lip of Sanxet, (pause to take in the views), to pass below the "waterfall" (occational), and the overwhelming cliffs of the "Habitationes de Dios" , followed by a gentle descent to the three bars and restaurants in the Racon de Pepe area.
Click here for map and directions
Click here for video of walk


OPTIONAL START FROM CASA DE DIOS ROAD
With continual road closures to interfere with our walk starts,
here is an alternative start . 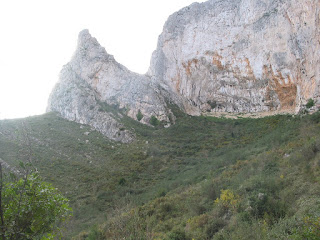 A very good circular walk introducing the eastern end of the range and two of the six main passes, Collados Sanxet and Llam. Views of stunning cliffs, a glimpse of the Buddhist Colony, visit to a large farmhouse, high up and spectacularly sited. This is also the starting point for the optional ascent of Sanxet, (1184m). Like many circuits it is almost as successful done the other way round which has the difference of an easier but less interesting start followed by a rather long haul up to Collado del Llam.

Listening Station Walk
A pleasant long walk up to top of Aitana to listening station originally built by Americans
to easedrop on Russian "cold war enemies". Station is now in the hands of Spainsh.
Click here for photos of listening station walk 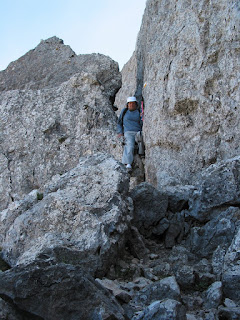 Starting from top of Aitana at listening station, an interesting scramble through narrow
rock clift.
Click here for photos
Click here for video of walk